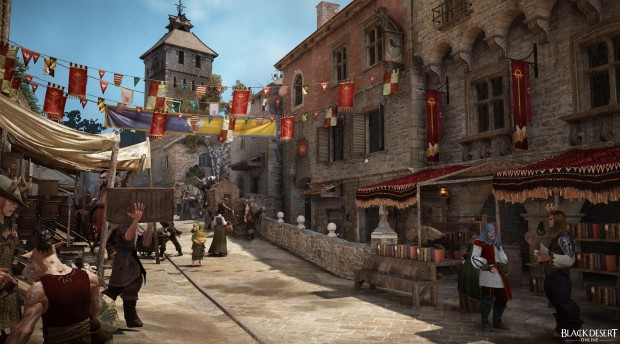 A BDO town – witness the beeeeeoooooty!

The GGGs have decamped from Tyria and taken up residence in the world of Black Desert Online*. Well, most of them. I remain in Tyria, despite many (very kind!) offers of week-long trial keys, resolutely tramping about doing the same old stuff I’ve done in Tyria since beta.

Now the Gs in BDO are all loving it and are singing its many praises over in the GGG G+ community and the consensus seems to be that BDO is a Very Good Thing for a variety of reasons such as beauty, horse taming, exploring, and a general sense of the world being alive. All of these things are things I claim I want in a game so why am I not playing it?

Well, as with many things in life there are many overlapping reasons behind my steadfastly Tyria-bound feet and these include:

Out of these I honestly think the last is the one keeping me from the game the most. Guild Wars 2 has spoilt me by providing the one thing I want from a game – fun on demand. In Tyria I can teleport around the world with ease, each jump sending me close to a dynamic event, group experience, or hidden surprise I can join in and play. In LOTRO, the last game I played with a horse-riding mechanic similar to BDOs, I use to hire a ride from Bree to wherever and then walk away from the PC for 10 minutes until the horse pulled up the new stable and vanished. After that I’d have to run out into the wild to start work on quests which needed turning in back at the stable’s location area. Whilst my first ride to Rivendell was fun, my third really wasn’t. I hated it that waste of my time with a passion.

Ultimately I think this is what will make me wait a while longer before I join BDO, and to be fair to that game, any other MMO including Elite Dangerous. Guild Wars 2 has many flaws but being easily accessible and pretty much always fun isn’t one of them. Grind in Tyria is optional, at least serious grind for something like a Legendary, so I never feel like the game is wasting my time. The cash store is pretty fair so I never feel I’m being milked or fleeced as I did in LOTRO. The barriers between players are so low that I never feel like I can’t just help someone out. For me, at least, Guild Wars 2 hits enough of my playstyle needs even if it misses a lot of my desires and that’s what keeps me from straying too far.

Now if I could just get Arenanet to make the world come alive with more NPC interactions, readable books, watchable plays, and open housing in cities…